Zero Waste Chicago has quietly sprung up in Chicago.  In recent years Chicago has seen its fair share of improvements and success stories, such as the Cubs breaking the curse and the Blackhawks winning a few of Stanley cups. However there is an ugly problem that Chicago is facing that no one wants to talk about, the state of it’s rivers. Currently, the rivers of Chicago are constantly getting filled up with trash and tires. This has two major consequences, first it negatively impacts any animal that is living near the river, and secondly, the litter in the river becomes an eyesore. Fortunately, there are several local groups and organizations that are attempting to combat this problem.

Zero Waste Chicago is a grassroots environmental organization who is working with local residents to reduce the about of waste and litter that is left in the streets and rivers of Chicago. This group understands that Chicago has a long way to go to become a clean and green city and is attempting to get community members involved in the cleanup process. Zero Waste Chicago realizes that having multiple small clean up projects can go a long way. If you are a local resident and are interested in volunteering at future events click here to learn more about Zero Waste Chicago. 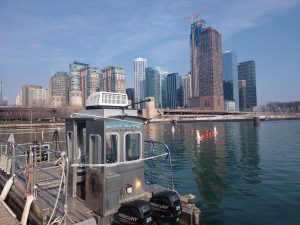 Another way that Chicago is attempting to clean its rivers, it through the use of two boats. Currently, there are two boats who carry a large net and sift through the water and collect litter and trash from the bottom of the river. On average each of these boats collects 100 yards of waste per year. While the boats clearly do a good job of helping maintain the river ecosystem, it is also important for individuals to do their part and stop throwing waste and tires into the river. Thankfully, that is exactly what people from Chicago are doing. Just in this past year a large volunteer effort to clean up the local rivers had over a thousand individuals participating. To learn more about how you can help clean up Chicago click here.