Recently, Sanford decided to double down on its approach to sustainability. This decision has short term aspirations such as improved housing efficiency and to become more walkable, and the town hopes to spur the local residents to make long term changes . In order to become a sustainable city, it must ensure that all three pillars; economic, social and environmental are included in their decision making. Often cities, companies, and even individuals prioritize one of these factors over the others, which is not a sustainable way of addressing challenges. Unfortunately, many times cities state a broad objective of becoming this or that and then have a hard time actually following through with their proposal. If Sanford wants to avoid falling into this trap, they have to be conscious of their decisions not only for the present but also for future generations. In order for any city or town to attain a truly sustainable future, they must pass regulations and legislation to encourage economic growth.  This can be achieved while maintaining the cultural norms and values of the community that are consistent with having a positive impact on the environment. Not only will you need a top-down approach, but also a grassroots movements from local community members showing you what issues have the support of the community.

In 2015, Sanford continued the sustainability process by attempting to factor in more environmental outcomes in their decision-making process. An example of this is their master plan to work on providing more energy efficient buildings as well as a more walkable city. One of the main objectives in the plan is to break away from individuals only focusing on maintaining and improving their own building, and instead to switch the focus to thinking about how to make a positive impact on the community as a whole. This ties in nicely with a core value of sustainable, interconnection. It is easy to only consider actions and how they impact and influence you, as this is human nature. However, sustainability systems thinkers take a step back and look at the bigger picture. It is only through taking this step back that you will be able to see how decisions and actions influence others. 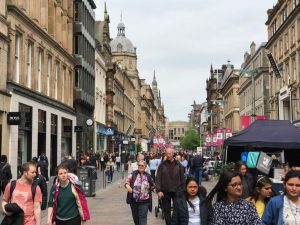 Sometimes, environmental problems and sustainability issues get put on the backburner since they are viewed as idealistic solutions with little to no feasibility. This ultimately forces the environmental and sustainability scientists to go back and find data proving a positive environmental impact while also contributing to a thriving local economy. Luckily for us, the book titled Drawdown has crunched the numbers on a number of sustainable initiatives.  One example they detail is the option of becoming a walkable city and improving housing efficiency. They report that designing cities to become more land condensed is proven to increase the number of people walking. They estimate that 20-40 % are likely to reduce their car usage and find alternative forms of transportation when cities are built up instead of sprawling horizontally. Not only will this have a positive influence on local individuals health, but it is also projected to reduce carbon emissions by 2.92 gigatons by 2050.

Sanford is looking to handle their environmental problems by creating more energy efficient buildings. Currently, a large amount of most people’s and a company’s money is spent on utility bills. The local government cannot magically make those disappear.  They have however found a direct link between people’s decision making and the bills they pay. Energy is necessary in order to pretty much do anything whether it’s cooking dinner, cooling the house, lighting reading corners or providing energy to run the sink faucet. One of the reasons that our utility bills are so expensive is that people are wasteful and leave on the television, run the tap when washing their teeth, and leave the room without turning off the lights. Simply taking the extra second to avoid doing these silly little mistakes will lead to a significantly less expensive bill. If you are an overachiever like myself, you should look into making simple household changes to further reduce the energy usage and expenses. One such change is switching from incandescent light bulbs to LED bulbs. While the LED bulbs are currently, the more expensive option, they do provide more light and have a longer life span. It has been reported that LED uses 90% less energy when compared to incandescent bulbs. Do not become satisfied by the decisions and actions that have caused Sanford to become a greener city, strive to further this cause and cement Sanford as one of the greenest cities in America.