There has been a major change in the recycling industry in recent years, due to the fact that China has restricted the types of recycled materials that it is willing to take from America. For the longest time, America would generate vast amounts of recycling and ship it off to China to get sorted. However, the recycling stream that we would send to China has progressively become more and more contaminated, so much so that China decided to implement stricter recycling guidelines. This tightened recycling policy was broken into two phases. The first phase began in 2017 and heavily restricted some of America’s most commonly recycled items such as mixed paper and plastics. The second phase is expected to begin as soon as 2020, with the potential for all solid waste products to get banned. While this is obviously a big below to America’s national waste system, it also has lingering effects on smaller communities such as Deltona.

Because of the new recycling standards set by China, there has been a dramatic increase in the cost per ton for recycling. It has been reported that the cost have risen from $50 per ton, all the way up to $77 per ton. This increase in price is a side effect of China not wanting to import any recycled material with a contamination level above .05%. With the recycling streams full contamination through putting waste into the recycling or incorrectly sorting the recyclable materials, there is very little of America’s recycling that is able to get shipped over to China. This ultimately lead to the increase in cost for domestic recycling factories, which put a strain on local waste hauling companies. As a result in Deltona, it was determined that the cost of providing curbside recycling was too big of a burden, and they decided to suspend curbside recycling indefinitely. 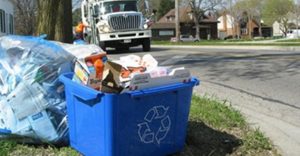 Currently Deltona is in a catch 22 situation, since the reason it had recycling was to reduce the waste and litter throughout the city, however because the price was too steep they are now not willing to pay for the waste services. The unfortunate truth is with there no longer being a recycling pickup it is hard to think that individuals on their own will improve their recycling habits. There are serious environmental and sustainability related ramifications that will occur if waste management and recycling are not done correctly. The first and most notable way to see the negative impacts of not providing a waste services is through waste and litter beginning to pileup in the streets. Litter and trash that is left on the ground will blow in the wind and end up in the pristine lakes and natural habits that Deltona is so proud of. It has been reported that hundreds of species residing in lakes, rivers and oceans get caught in plastic that gets blown into the water. In order to keep Deltona it’s beautiful self everyone has to be extra careful of how they recycle and remove their waste. Just because curbside recycling is not operating at the time being is not an excuse for people to fall into bad habits and further hurt the looks and natural feel of this proud city.