One of the most appealing features that Apopka, FL had to offer was its pristine lake. This was a place where families of fish multiplied and local residents could go to get away from the stress and frustration of their daily chores. However, over time the lake began to get abused by the people who inhabited it and the real estate market which prioritized economic growth and development over natural beauty. As a result, the lake went from being a desired natural spot to a location that was far less sought after for enjoyment. While it is impossible to go back and change what has happened in the past, there is one thing that we can do; restore the Apopka Lake. Friends of Lake Apopka is a local organization that’s primary goal is to restore the lake and its water quality back to its glory days. Friends of Lake Apopka host quarterly meetings that are open to the public.  The agenda is to both promote awareness of this issue and to come up with new and innovative ways to clean up the lake. If you are interested in learning more about the Friends of Lake Apopka organization, make sure to click on this link.

Friends of Lake Apopka are not the only group of people interested in improving the conditions of the local lake. The Orlando Sentinel recently wrote an article talking about how local homeowners were in full support of the local government spending 750 million dollars over the course of twenty years to cleanup the lake. This is positive news for the community, seeing as the lake was not only a wildlife preservation but also a popular spot to get out and about for hikes and picnics. The land surrounding the lake allowed residents to be able to run, bike and walk in a location where they don’t have to hear the honking of car horns. 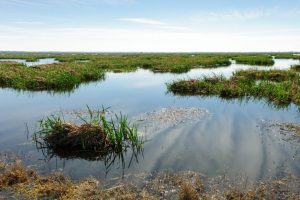 While it seems like Apopka is well on its way to getting back one of its lost treasures, it is important to remember that the cause of this problem was through the city only focusing on economic growth. In order for a city to become sustainable, it has to not only consider economic development, but also social and environmental impacts. Equally a city cannot be sustainable through only focusing on land restoration and habitat preservation. There needs to be a balance of these three factors otherwise, as we have witnessed, there will be negative unintended consequences. Another vital thing that cannot get emphasized enough, is the idea that we should not only make good decisions for the present but also for future generations. A way of ensuring this is for citizens to take a moment to go back and review city master plan documents and make sure that they are following through with their promises. Gian Basili, the head of the St. Johns River Water Management District, echoes this thought by saying “ we’ve seen that it is cheaper to prevent the pollution than to go back in and restore them later.” Clearly it is going to cost some money to maintain the Apopka lake so that residents can enjoy it, but if you do not put in the upfront cost, then it will be that much steeper of a climb when looking to restore the lake.