The climate and long term weather patterns are changing.  Climate is a hot topic in the city of Hialeah, Florida. While listening to the report of record temperatures, Hialeah has become proactive with how they view the climate situation. Through an innovative mindset they have been able to look towards ways to improve the environment and the local community. One of these ideas is floating solar panels on the water. 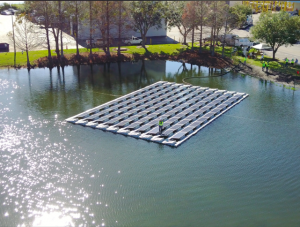 While this might not jump off the news report like the recent Canadian carbon tax, it is very significant. It has been proven that since the start of the industrial revolution, the stress that humans have put on the environment has skyrocketed. The constant need for new phones and computers along with the fact that driving and flying make up most of how we as a society move around leads to large amounts of carbon resources being used. While the earth has vast amounts of resources and materials, humans are using the materials at a faster rate than they can be replenished. That is why is so important for companies such as D3energy to produce floating solar panels to generate renewable energy.

America is currently trying to figure out the correct ratio of coal as a source of energy combined with alternative energy sources such as solar, hydro and wind turbines. The downside on some renewable energy is the fact that it is quite expensive at first to install the new infrastructures. However, after the initial investment burden, solar energy sources are able to reduce energy costs down the road. What makes D3energy so special is the fact that they are utilizing available water space in an attempt to increase local energy production.  Floating solar panels are important due to the fact that they also protect the water from sunlight.  Energy is generated, and the temperature of the water is protected from increasingly powerful rays of the sun.

Another great aspect of using solar energy is the fact that solar panels have a 30 year life span. Furthermore, it is reported that 15 billion dollars could be saved by the year 2050, if the materials are recycled. A few companies have started taking the initiative of creating plants with the sole purpose of reusing and recycling solar panel materials. One of these innovative companies is Veolia, who just in the last year built their first solar panel recycling plant. It is encouraging to see communities such as Hialeah doing their part to help promote clean and efficient energy usage.