Gainesville has announced an ambitious goal of generating zero waste by 2040. The primary focus is on reducing the amount of contaminated waste in the recycling stream. Unfortunately there is still an ever present problem with people putting the wrong thing in the recycling can. The two most common recycling problems are people lacking the education of what items are and are not able to get reused along with people putting recyclables in the wrong container.  Most local recycling facilities will have separate containers for glass, aluminum, cardboard etc. If you want to recycle cardboard and glass from your home, and then mix glass in the cardboard receptacle it will unfortunately lead to more problems than just disposing of the items in the trash. On the flipside, people who throw in materials that do not belong in any recycling pile; such as food waste, torn up clothing, or plastic bags in the blue recycling can also cause problems for the county recycling plant. These items are clearly not able to get recycled, forcing employees to go through and manually sift the non-recyclable from the recyclable material, which slows down the operation. The need to sort through recycling to find trash and non recyclables is a waste of the employees time and leads to the recycling plants to actually eat some of their revenue or pass on increased cost to all consumer. Do not be that person who contaminates Gainesville’s recycling stream by not paying attention to what you throw in the recycling bin. 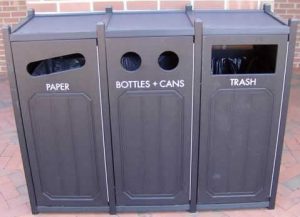 The plan of completely removing all waste in Gainesville by 2040 has several benchmarks as a way to ensure that progress is getting met each year. The first objective in the plan is for at least 75% of the waste to be recycled within the next two years, and then for 90% of all waste to get recycled by 2030. The setting of these targets was based on the fact that it seems like a manageable goal to be accomplished in a short period of time. In order to continue this positive trajectory, Zero Waste Gainesville is seeking other groups to partner with to continue to help their cause. One idea that has been proposed is to target University of Florida students behaviors and to educate the students on the impact of recycling as well as inform them of what can and cannot get thrown away. The idea is for there to be an increased presence by the University of Florida’s sustainability coordinator. Simple solutions such as giving every dorm a recycling bin at the end of the hall can go a long way to capture and encourage the sheer volume of people who would recycle more. Another suggestion was to address the food waste problem through implementing more compost bins for the University. Through improving students access to recycling containers, promoting further education about the can and cannots of recycling as well as increased composting, the Gators students could dramatically help Gainesville towards their ultimate goal of zero waste by 2040. Click here to learn about what Zero Waste does and when the next environmental discussion will occur.

Yet another group advocating for improved waste management practices in Gainesville is Waste Management. Currently, there is a rather large landfill on Monroe Drive that is 50 acres in size. Waste Management is looking to condense the landfill to a modest 37 acres. The landfill is creating large amounts of carbon emissions, and through shrinking the landfill, the landfill’s carbon footprint would decrease significantly. As it stands the landfill has a large area where most of the current waste gets thrown into a space, and it has a slightly smaller second area for which waste accumulates over time. Waste Management’s idea is to remove the smaller area and condense the landfill into just one larger mound of trash.  Residents of Gainesville can support the Zero Waste goal by educating themselves to increase recyclable and composting material with the outcome that less waste will go into the one condensed trash site. Green initiatives and waste economics are improved by the support and practice of the entire community.