Cape Coral, like any other city in America, is looking to clean up the amount of trash and debris that is on their streets. Waste Pros, a major trash collector in the area, has helped spur this idea with their friendly pamphlets, which remind residents what is trash and what is recycling. The main concern of Waste Pros and other like minded companies is the large amount of contaminated waste that they collect. It is reported that on average when all is said and done, there is roughly 400 tons of material collected a day in Lee County. While this vast amount of trash might seem impressive, it comes with a catch. Of the 400 tons of material collected more than 20% of it is trash, meaning that the recycling is contaminated. The problem with this is that it costs a large amount of money to repurpose recycled materials, let alone to have to eat some of the cost, since they are not able to reuse contaminated materials.

Local residents are not the only ones to blame for the dirty streets in Cape Coral. Local residents have complained about the matter in which Waste Pro and other trash hauling companies collected the garbage. There have been reports that the companies are trying to collect the trash too fast and end up leaving debris and bottles behind them when they leave. As the old expression goes “slow is smooth, smooth is fast”…it would be wise of the trash haulers to spend an extra moment to be more careful. 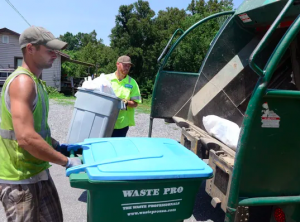 Unfortunately, Cape Coral’s waste management services have been in hot water recently, due to the fact that they have been spotty about picking up community members trash. At first, local residents were willing to accept one weeks worth of missed trash collection, however when it became multiple weeks without any service their patience grew thin. The service companies were quick with excuses which only lead to more complaints. It has been reported that by July of 2018, there were over 800 complaints in regards to trash collection. To put this into perspective, it was almost double the number of complaints compared to the surrounding counties. With renewed focus, local trash haulers have done a significant job improving the collection, leading to a severe drop in complaints.

Even with these trash related issues, Cape Coral seems to be heading in the right direction. They certainly are not alone when facing the uphill battle to reduce their recycling contamination. Little things such as actually collecting the trash and not leaving a mess behind will go a long way. These are simple issues that can easily be addressed, there is no reason to think that within the next few months that Cape Coral can correct these issues and become the clean city that they know that they can be.